In 2008, we released Phono Amplifier EA-5 applying the semiconductor technologies for analog disk lovers, saying "Analog audio products are not fully mastered yet" as our catchword; and a lot of audio fans supported it and gave the high evaluation. After we have released EA-5, we have looked for other options and have continued constant pursuance.

In this equipment, the AC adopter of EA-5 is removed and the power supply portion having a powerful power transformer is adopted. We release EA-200; the well-received sound quality is improved furthermore by improving the circuits, and the appearance is changed to new sophisticated design.

Only one in the class, a non-feedback type amplifying circuit due to all discrete parts

The load feedback amplifier which holds the popularity of present amplifiers always compares the input and output signals and this difference (supplement signal) is amplified as an input signal which makes it possible for a high quality of amplification at a low cost.

In regards to this, non-feedback amps amplify the input signal itself, which makes a big difference.

However for a non-feedback amplifier, it does not have a supplemental operation as like the load feedback amplifier and therefore there is a rise in costs due to structural parts and requests of high accuracy on the operation settings. However, in terms of sound quality, it is excellent in music impression, dynamics, and shading expressions and it is an amplifying type having strong support of music and audio funs and all Phasemation amplifiers adopt this non-feedback amplifying circuit.

For this equipment, the circuit structure composing of discrete parts is adopted, which might be only one in this class; by doing this, the well-selected discrete active elements for the non-feedback amplifier can ideally operate.

As a result, "rich gradational expression of sound, impression and high S/N, and excelled air expression coping" is reached at a high level, equivalent to an upper class device which was difficult on phono amplifiers of this class.

a) High Gm FETs (field-effect transistor) are adopted in the first portion, so, a voltage-current converter of extremely low noises has been structured.
Due to a constant current circuit of low noise in which this circuit thoroughly discards deteriorating causes of sound quality and inflow of noises, the operation point is stably fixed.
By changing this voltage-current conversion coefficient, it makes the gain which is requested to the MM or MC cartridge.

b) In the second portion, stable current amplifier and voltage converter are structured, and the RIAA impedance elements arranged at the output point make the reproducing characteristic. As a result, CR type equalizer circuit having a very high frequency limit without RIAA deviation has been structured, so, it has an excellent transient characteristic.
For this circuit, various circuit techniques are adopted to perform accurately without influences of any current conversion tolerances and any variations of amplifier element parameters depending on the output voltage. Although it is a non-feedback type amplifier, it has various excelled characteristics that make it to be equal as a feedback type amplifier.

c) For the output buffer, the inverted Darlington circuit is adopted to ensure a high input impedance and low output impedance, which strongly drives the device in the next circuit.

For phono amplifiers to have to amplify a weak signal, a solid chassis structure not to be influenced from others is required.

1) For the chassis base and top cover making of a 1.6 mm steel plate, copper plating and finishing are conducted. Together with a chassis size of a comparably small shape, it achieved reduction of magnetic distortion and secured the high strength of rigidity.
2) Throws out redundant accessory functions and inputs weak phono signals directly to the amplifier.

1) Builds the dual monaural layout of the same pattern of the left and right, and actualizes a uniformity of the left and right channels at a high level. Adopts the better power transformer than necessary and sufficient one, and supplies power without any common power impedances due to left/right individual powers and accomplishes a channel separation of 90dB or more (20Hz to 20kHz). 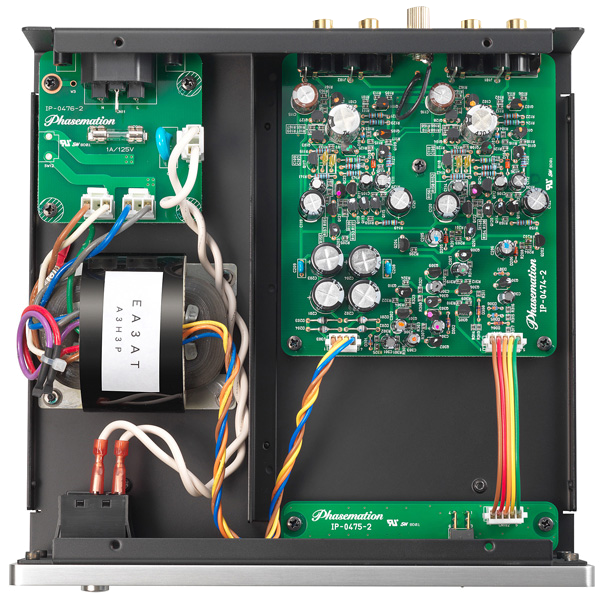 The following evaluated high sound quality parts and so on are adopted for the RIAA impedance elements and the audio signal main portion which strongly influence to a sound quality of a phono amplifier.

The following parts are adopted for the power circuit in order to prevent the decrease in speed of recovery in high current range, which has made it structure a very low noise power supply.