Get a free Audience Forte f3 Power Cord with HiFi Components purchase of $2,000 or more

It was back in the year 2008 that T+A introduced the first Caruso, and within a very short time the device won numerous prizes, gaining absolute cult status due to its outstanding functionality and superb design. Its successor, the Caruso Blu, continued this heritage in a modernised form. By this means both machines laid the foundation for all the units of the Caruso series. The latest sources, a modern mode of operation and a streamlined appearance of timeless elegance: these are the criteria to which every device bearing the Caruso name must measure up. Even though all of them constitute unique developments, they all share the same DNA.

We decided to develop the new T+A NavigatorOS in order to encompass the huge range of the Caruso’s functions: a seven-inch touchscreen includes all the control elements required, while the software as a whole was designed with intuitive operation as top priority. For the first time the NavigatorOS enables large-format cover art to be displayed on the device itself. Alternatively the Caruso can be operated using the FM Caruso remote control handset as well as the T+A CarusoNavigator App. The slot for the modern CD mechanism is located above the touch-panel. Sound from that source is exceptional, and thanks to the generous buffer – more than twenty seconds – it operates completely distortion-free even at very high volume. All relevant information is displayed on the playscreen.

The range of connections on the back panel indicates the universal scope of the Caruso’s facilities. The set can be used simply as a compact system offering impressive sound quality, but it can equally well be upgraded to form the core of a high-quality Hi-Fi system simply be connecting a subwoofer or additional active loudspeakers. Two analogue inputs are also present, typically for connecting a turntable with phono pre-amplifier and one further analogue source, plus two digital inputs for connecting TVs or set-top boxes. Aerial inputs are present for Bluetooth, WLAN and FM/DAB+ radio. Since the DAB+ and VHF tuners are capable of delivering superb sound, it is certainly worthwhile to connect a high-quality external aerial. Access to the latest music media is provided by the LAN socket, the WLAN aerial and the USB input; the Caruso automatically detects the streaming sources connected to it, and exploits the facilities of your network and the Internet in optimum style.

A new streaming client, developed specifically for the Caruso, provides access to a vast range of services and sources such as Gracenote Musik ID, Airable Music Services, Spotify Connect and even Amazon Alexa.
The superior sound of the Caruso can be traced back to two features: the first is the active design philosophy of the sound system and the quality of the integral loudspeakers, while the second is the adoption of the latest generation of very powerful digital signal processors. Not only does the DSP linearise and optimise the frequency response of the integral drive units, at the same time separating the frequency ranges with a steep cut-off, but it also ensures that the dispersion characteristics of all systems maintain correct phase. The net result is that the Caruso generates a phenomenally well-balanced, natural and clear sound image in the whole listening area. It is also possible to fine-tune the sound contours to suit the unit’s position in the room. If necessary, bass, mid-range and treble can be adjusted, as well a very effective loudness function is available

The baseplate of the Caruso carries a high-performance bass driver featuring an extremely large magnet with a deep drawn pole plate and a rigid, well-damped aluminium cone and surround, permitting extremely large excursions. These features enable it to generate deep bass response at very high levels without suffering distortion. However, even this sophisticated driver would not be capable of delivering such tremendous bass from the Caruso’s small case without the support of two bass-tuned passive radiators. These are located in the left and right side panels, behind the loudspeaker grilles.
The mid / treble range of the left and right channels is handled by two sets of newly developed mid-range / treble units and dome tweeters, which are inset into the aluminium front panel of the inner case, inclined slightly to left and right. They are very linear in response, and reproduce the entire vocal and treble range from 200 Hz to more than 30 kHz with an ultra-wide dispersion angle. Each of the speaker sets is driven directly by its own power amplifier stage, i.e. they are direct-coupled, without the passive components of conventional crossover units. This active design philosophy maintains a very high damping factor, and helps to optimise the system’s peak handling and radiation characteristics; this is crucial to the Caruso’s outstanding spatial sound image. The output stages with their direct-coupled drivers are controlled by the integral DSP, which is responsible for every aspect of signal processing from linearisation to crossover frequencies, and is entirely loss-free in operation.
The weight of the Caruso is an indication of the unit’s internal ruggedness. The case is enormously rigid thanks to its newly developed T+A Aluminium Framework: a complex profiled extrusion acts as the load-bearing support for the entire internal architecture. The result is that the Caruso’s net internal volume is relatively large, which in turn contributes to its astonishing reproduction of very deep bass. Even at extremely high levels the case remains composed and resonance-free.

The weight of the Caruso is an indication of the unit’s internal ruggedness. The case is enormously rigid thanks to its newly developed T+A Aluminium Framework: a complex profiled extrusion acts as the load-bearing support for the entire internal architecture. The result is that the Caruso’s net internal volume is relatively large, which in turn contributes to its astonishing reproduction of very deep bass. Even at extremely high levels the case remains composed and resonance-free. 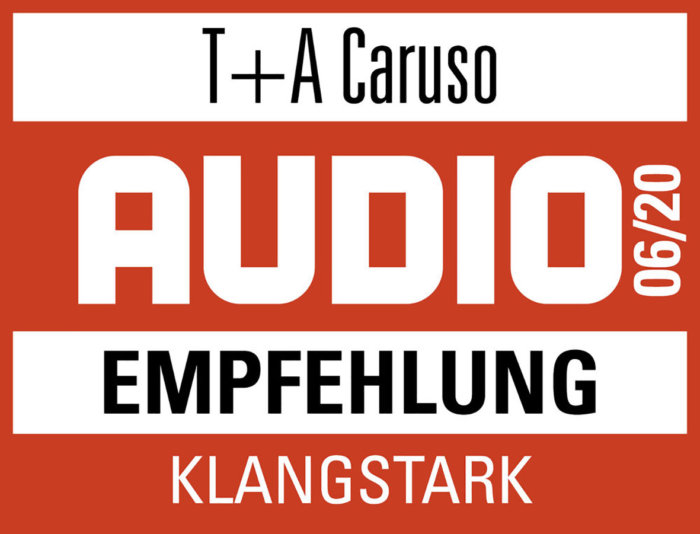